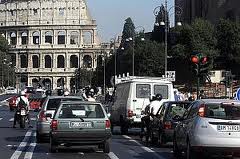 Yesterday I was in Rome to teach in a short course on Bayesian methods in health economics.

The 6.45am flight from London was actually on time, which was impressive, considering that the last time I flew Alitalia I never made it to Rome $-$ we stopped in Milan but, because of “technical problems”, the flight was cancelled. I had to give a talk via Skype from the airport and then got back to London with the very last flight, although I was originally supposed to be back with the 7.30pm flight.

I arrived at Fiumicino at about 10.30am and after the passport control I headed to the train station. Unfortunately, there was no train scheduled to go into central Rome in the near future (or, for that matters, even in the distant future, according to the electronic board). So I walked back to the coach station. Signs on either side and on the front of the coach, as well as on the actual ticket said €4 one-way.

The driver however said that it was €5.

After a few minutes we left. Before we were even out of the parking lot, the driver was already shouting on his mobile phone (the first call was to “Fra”) $-$ needless to say, he did not have blue-tooth or headphones; although to be fair he was remarkably good at handling the steering wheel with his knees.

The first part of the journey into Rome is on the motorway and it wasn’t very busy, so he was just happy to chat away, mostly boosting to his friends that they got stuck in traffic because they didn’t ask his advice; but there also was a call to his mum (who, apparently, had annoyingly failed to talk to dad, which means he would have to do it himself) and a failed attempt to contact his wife, Barbara.

When we actually got to the outskirts of town and off the motorway, the traffic became a bit worse. At that point, his friend “Fra” called again, and again the driver started to playfully (I think) insult them because they were stuck in traffic. Until we also got stuck in a big jam, that is. In response to this, he started to honk the horn and shout at everybody, including a policeman who was handling the traffic (well, he wasn’t really doing a good job, but still…).

Finally, a good 90 minutes after we left the airport, we arrived in central Rome, which unfortunately was still not where I needed to go. Because of a strike and a couple of demonstrations, the traffic in the area was mental. There was no official queue for the taxi, but I still managed to waive at and stop one, so I suppose I shouldn’t complain too much that to do this (6km) it took me another 45 minutes.

After a quick lunch, we started the course; the turnout was all right (about 20 people) and I think it went reasonably well $-$ although, as I suspected, we had planned a bit too much. I have given this lecture a few times in the last months (although in slightly different formats and this time it included more bits about the general principles of Bayesian statistics) and there are a couple of things that I think are really interesting.

The first is that people seem to be genuinely surprised to hear about the controversy between Neyman-Pearson and Fisher and that they couldn’t even bear to be in the same department (the usual reaction from the audience is to think I’m joking). The second is the reaction to my point that the prior information and the prior distribution are two different things, which I always stress. I think people generally take this well and I think it makes it a bit easier to come to terms with the idea of formulating the prior as just one possible probabilistic “translation” of some knowledge, which can be generally expressed in words.

At the end of the course, I took a taxi to the airport. It was still pretty busy, but that didn’t bother me that much (by then I’d sort of given up). I got to the airport in time for a quick (and incredibly expensive) sandwich before boarding the flight, only to discover that they had assigned seat 4A to 4 people $-$ of course I was one of them. The plane was not very full, but they still spent a good 15 minutes frantically calling I-don’t-know-who on the phone to try and “sort it out”. Which they did, in the end $-$ by telling three of us to just find another seat.